Blog
How Allegorithmic used an online marketplace to build a community 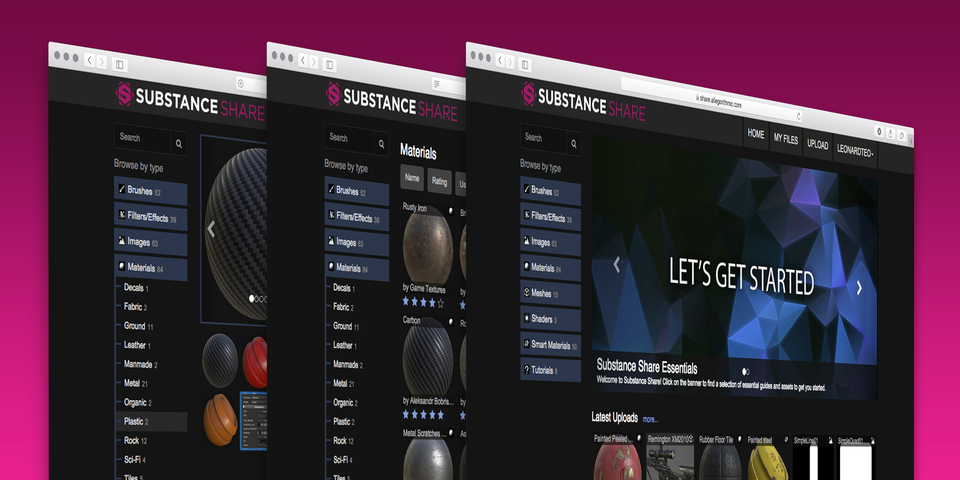 Allegorithmic is an industry-leading software developer that creates texturing tools used by the gaming and entertainment industries. What started out as a burgeoning firm from central France in 2003 fast evolved into an award-winning global company, setting the standard for Physically-Based Rendering (PBR) content creation and authoring. With clients like Nintendo, Sega, Ubisoft, WB, and Leapfrog (to name a few), Allegorithmic knew they had successfully cornered the gaming and entertainment market with their niche products.

Launched in 2014, Substance Painter is an innovative tool which quickly powered past all other 3D tools to have the fastest user-growth rate since ZBrush. Substance Painter also helped to lay the seeds of a 3D community with Substance tools at the core. Allegorithmic saw great potential in that early community and knew they wanted to nurture it, the question was how.

Not long after, other industries including film, architecture, and design took notice of how these visionary tools might be applicable to them. Allegorithmic recognized that in order to cement themselves as the expert in these new industries, they had to position themselves at the centre of the 3D art community, which meant getting their tools into the hands of as many users as possible.

And so the idea to build their own P2P platform was born. It would offer the community a marketplace to share content for free while also using Allegorithmic’s current texturing tools. Allegorithmic realized that such a marketplace would be a big investment in time, resources, and subsequent maintenance. They had big ideas—making sure the platform would be embedded into current products for a single sign-on, including social elements (such as ratings and comments), and making it user-friendly for their IT-savvy target audience. They knew they did not have the in-house expertise to carefully craft the marketplace at the centre of their plan. They would need experts to help bring their vision to life. That is when they turned to Ballistiq.

Ballistiq had previously created an online store for Allegorithmic and the success of that initial opportunity forged a strong partnership that was a natural fit for the marketplace work. Quickly the idea for Substance Share, a free exchange platform was born.

The two companies worked jointly through brainstorming, testing and staging, always with the artist or designer’s needs as top of mind. By working closely with one another, Ballistiq was able to expertly deliver on Allegorithmic’s most important requirements for Substance Share: an open exchange that would function within their current product and develop a community socially (via comments, ratings, and more).

Substance Share would allow artists to showcase and share the art that they created (meshes, brushes etc) with other artists while using texture tools developed by the company. Those users who already utilized tools from Allegorithmic’s “ecosystem”, such as Substance Painter, could easily upload straight to the platform. Allegorithmic would curate the content for quality shared in their online marketplace, but otherwise, it would be left to the community to run.

Once uploaded, the community would have a one-stop shop for content. The allure of having access to a single library of content for free was the biggest benefit to future users. Allegorithmic’s tools would be quickly reaching more artists and designers specializing in 3D art across a wider variety of industries, and that would mean more reach and exposure for the company on top of that ever-important goal of building a community.

Whether a designer for a major company or just an aficionado of 3D art, artists were quickly flocking to sign up for Substance Share. The numbers speak for themselves: 15,000 downloads occurred in the first two days alone. By the fall of 2017, the platform had over 100,000 users (one of the biggest of its kind) with well over 2.5 million downloads. This was a huge achievement from the birth of the idea just three years prior.

CEO of Allegorithmic, Sébastien Deguy, explained that the decision to work with Ballistiq was easy:

With Ballistiq's marketplace and community expertise, Allegorithmic was able to realize their vision and create a platform that continues to grow and provide value to the Allegorithmic bottom line. In early 2017, the company won a Greentooth Award (a community-decided accolade) for their Substance tools.

You’ve invested the money, you’ve put in the time and now you have a live e-Learning platform. In 2016, the e-learning sector hit an impressive $51.6 billion, which means...

In December, for the first time, we gathered our entire team, from around the world, together in Montreal to celebrate and reflect. Bringing our diverse company together...

The Time-Saving Features of Cloudinary

Cloudinary is a SaaS product that provides, true to the name, a cloud-based digital asset management system. It is intended for any size web platform that wants their...

Integrating Stripe with any framework can be done with relative ease, and Stripe provides great documentation for integration and testing. In this post, I will discuss...

In this article, we will look at setting up Docker to build a production version of our Next.js application as a Docker image. We will also configure Docker to run this...

Ready to transform your business?

Got a question? Ready to start a project?

Send an email to bonjour@ballistiq.com or fill out the form