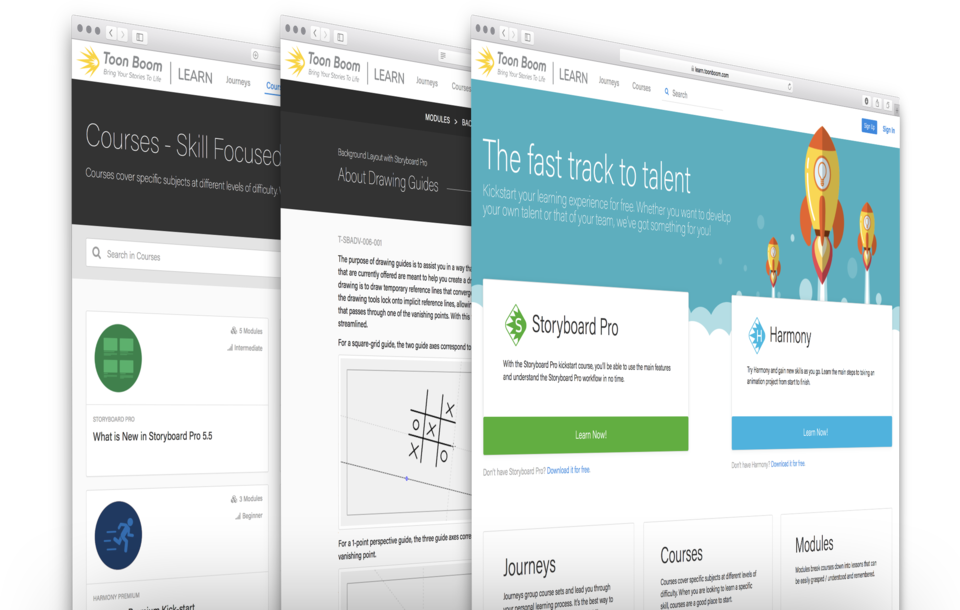 Toon Boom Animation is a Canadian software company based in Montreal, QC that specializes in animation and storyboarding software. Since 1994, software from Toon Boom has played a major role in the creation of films, television shows, web animations and games and is used by high-profile studios such as Walt Disney Animation Studios, Pixar and Fox Studios.

Toon Boom has three major products: Harmony, Storyboard Pro, and Producer. Harmony is a robust animation software that allows users to sketch, draw, paint and create camera motion and special effects— all from one tool. Storyboard Pro is a storyboarding software that allows users to combine drawing and animatic with camera control, in order to facilitate efficient and creative storyboarding. Their third product, Producer, is a production management tool that helps users track production progress while managing, reviewing and approving creative assets.

As studios began to recognize and appreciate the functionality of the products created by Toon Boom, the need for artists who knew and understood how to use these tools also grew. A genuine, worldwide need began to emerge as the demand for rigging artists, cut-out animators and composing artists increased from studios who adopted the intuitive animation and storyboarding software created by Toon Boom. Since Toon Boom offers post-sales support, their customer success team also began receiving more usage questions from their clients as studios tried to train their artists who were not familiar with the Toon Boom tools. A deeper analysis on the users who needed training, showed that the users of Toon Boom’s tools lived outside of Canada, and in various countries around the world, making product training difficult to schedule and facilitate.

With this influx of requests, Toon Boom realized that their clients and and their artists would benefit from a more structured and inclusive product training.

Soon, academic establishments also began reaching out to Toon Boom for curriculum advice on certification, video tutorials, and training materials. Aspiring artists knew that in order to be qualified for roles in major animation studios, they had to come to the table knowing how to use Harmony and Storyboard Pro, since those studios had already adopted the Toon Boom tools.

Toon Boom quickly realized that in order to ensure the longevity of their animation and storyboarding products within the industry that they needed to help supply the industry with extensive product training — enough training to create qualified users who knew how to use the product to its fullest capability.

Due to the diversity and location of their many artists, Toon Boom also realized that their product training needed to be accessible online in order to support the global artists who wanted to learn their tools. In addition, they wanted the freedom to create their own learning content and change and update it as necessary.

Industry experience also deemed an artist-friendly learning structure to be essential to capture user engagement. They knew that their learning platform had to be visual and informative and incorporate some sort of gamification to keep their users coming back to the portal. They wanted the training to be personalized and customized to the needs of their clients and the artist community, which is why they decided to recruit 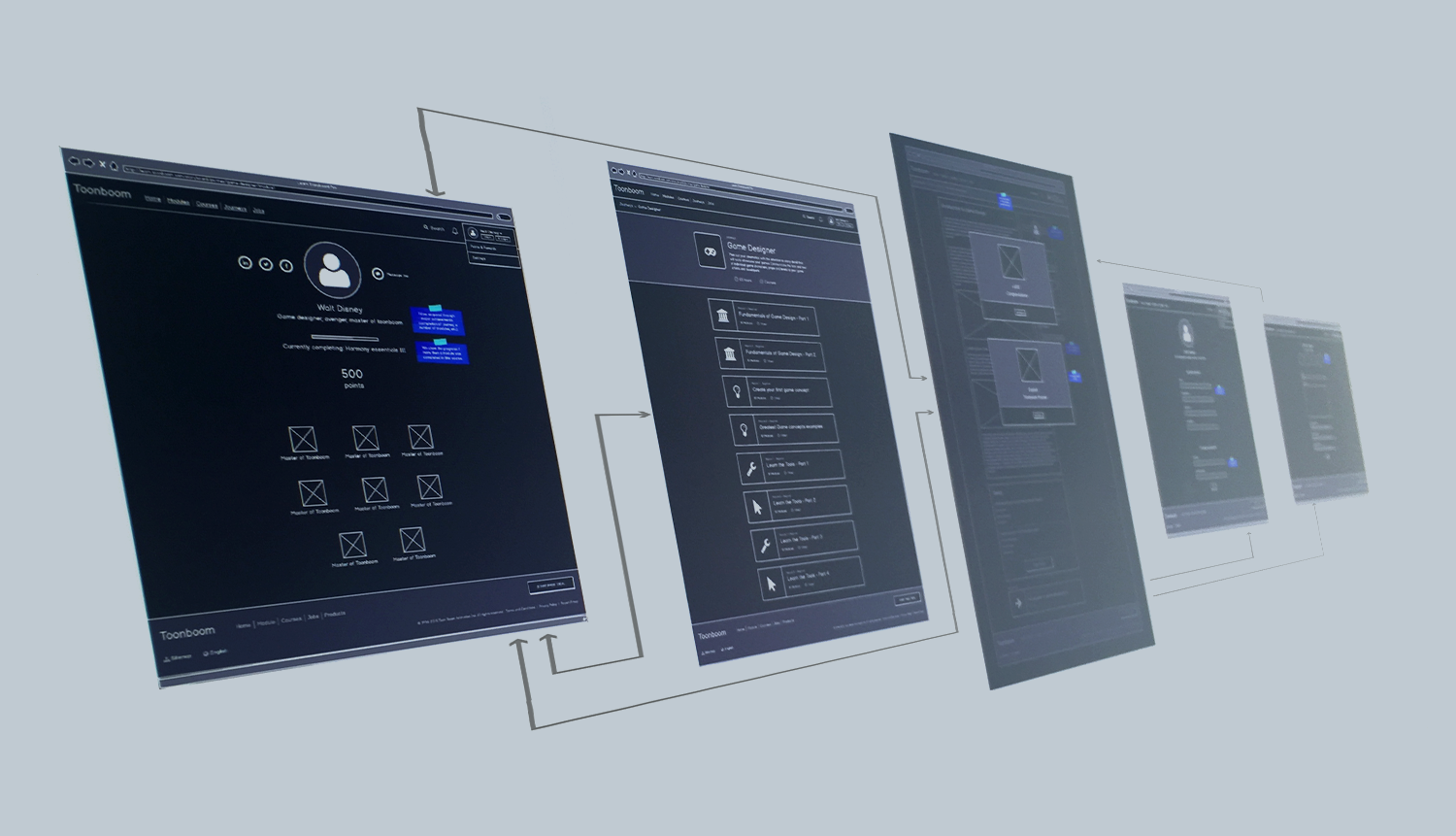 Ballistiq to help them create a custom e-learning platform that teaches users from all around the world and at all stages of their careers.

Together, Ballistiq and Toon Boom were able to create an e-learning Platform called Toon Boom Learn. This platform is free and self-paced, which allows aspiring artists as well as their clients, the ability to learn Harmony and Storyboard Pro conveniently from anywhere in the world. With the learning platform, they also helped their clients train and test their employees on the products, lowering customer support calls to their customer success team. By housing the training content in one centralized location, the support team was able to refer users to specific modules and courses, which saved time, and gave their clients a comprehensive and consistent answer each time.

With its customized platform, Toon Boom can update content based on what’s most in demand. They’re able to align their content with their training methods, and maintain consistency throughout the entire training program — while still ensuring that each course is tailored to a specific career path. They were also able to put a QA process in place, so that the customer success team could review the content before it goes live.

As of summer 2017, Toon Boom Learn has already reached more than 5,000 registered users. They have started seeing an impact in the educational market where teachers are directly using the learning platform to help teach their classes and as a means of homework assignment. They’ve received positive feedback from studios and their users, both whom have been using the additional training. Their support team is able to reduce the answer time on usage questions by referring the users to the right location on the portal, giving the user a much more precise answer and the option to watch videos, test their learning with sample material, and see the tool in context. The team hopes the number of calls will continue to decrease as Toon Boom Learn continues to grow and add to their content library.

In addition, due to the platform’s customization, the customer success team is able to modify the content and make quick adjustments on their own, from anywhere in the world at any time, which helps them maintain consistency and saves them from requesting technical access from their web team. By working with Ballistiq, Toon Boom was able to create a learning platform that empowers artists from all around the world to learn some of the industry’s most trusted and robust animation and storyboarding software. “One of the strongest points I found while working with Ballistiq was how responsive and quick the team was. The project scope was clearly understood and the proposed designs and methods were always close to what we had in mind. Communication was easy, questions were answered promptly, and modifications and bug fixes were handled in a timely fashion.” * Marie-Eve Chartrand, Director Customer Success*

Prev
Top
Next
Welcome to the Ballistiq Blog

Over the next seven years we’ve built several web products including community sites, learning platforms, and marketplaces that have done just that. In addition to building...

At Ballistiq, we’re proud of the beautifully functional platforms that we’ve helped create. A huge part of our business is creating visually stunning web platforms built...

The Time-Saving Features of Cloudinary

Cloudinary is a SaaS product that provides, true to the name, a cloud-based digital asset management system. It is intended for any size web platform that wants their...

Integrating Stripe with any framework can be done with relative ease, and Stripe provides great documentation for integration and testing. In this post, I will discuss...

In this article, we will look at setting up Docker to build a production version of our Next.js application as a Docker image. We will also configure Docker to run this...

Ready to transform your business?

Got a question? Ready to start a project?

Send an email to bonjour@ballistiq.com or fill out the form